Houston Is Unstoppable: Why Texas’ Juggernaut Is America’s #1 Job Creator

Houston is blessed by topography and geography. But the city’s recent success is really a masterclass in learning from history

It dominated the recession, crushed the recovery, and in a new analysis of jobs recovered since the downturn, its largest city stands apart as the most powerful job engine in the country — by far.

The ten largest metros have recovered 98 percent of the jobs lost during the recession, on average. But Houston, the first major city to regain all the jobs lost in the downturn, has now added more than two jobs for every one it lost after the crash. That’s incredible.

So, how come? There’s the abundant land and famously favorable business climate (although let’s not dwell on the actual climate). With its proximity to oil and Mexico, Houston is blessed by topography and geography. But the secret sauce of the city’s success might be something else: history — and an ability to learn from past mistakes.

The recession in Texas was relatively mild, partly thanks to mistakes learned by the region’s real estate and energy industries, said Patrick Jankowski, an economist and vice president of research at the Greater Houston Partnership. Texas “won” the recession not only because of the jobs it’s created, but also because of the jobs it’s hoarded — particularly in energy.

Hot, Flat, and Not as Crowded as You’d ThinkThe Arab Oil Embargo in 1973 quadrupled oil prices in just three months, sparking a drilling boom that at one point accounted for half of all jobs in Houston’s export sectors. But when oil prices collapsed in 1982, oil and mining jobs fell by 57 percent. “By the time Houston’s economy hit bottom in January ’87,” Jankowski said in an email, “the region had 221,900 fewer jobs than it had five years earlier.”

But the energy industry avoided a dramatic boom/bust cycle this time around.  “The region lost one in 22 jobs this recession versus one in seven jobs during the recession of the ’80s,” he said. Why were layoffs so mild? The story I’ve typically heard and reported is that energy prices fell later and recovered earlier than the rest of the economy. But Jankowski has another surprising theory. Houston’s energy sector is remarkably old — the average age is over 50 — and companies were nervous about laying off too many veteran workers before they had time to pass their skills down to the younger generation. Houston’s energy demographics “helped to moderate energy industry job losses,” leading to fewer job losses overall.

The 1980s also taught Houston a lesson about real estate. Between 1982 and 1987, Houston suffered “one of the worst regional recessions in U.S. history,” Jankowski said. The metro area lost more than 220,000 jobs — one in seven in the region — but added nearly 188,000 housing units, as developers ignored the signs that demand had plummeted. The results were disastrous and scarring for the real estate industry.

Houston avoided over-building problems in this recession by tightening lending and home construction in the early years of the crisis. Houston didn’t really have a housing bubble in the 2000s. The ratio between its median house prices and median household incomes peaked at 2.7 in 2006. By comparison, a typical Miami family would have to spend five-and-a-half years of their total income to afford an average home in the city by 2006. In Riverside, it would take nearly seven years. So as housing values cascading all across along the Sun Belt — by 40 percent percent in Miami and 44 percent in Riverside — they merely dipped about 2 percent in Houston.

Hitch a Ride
The Great Recession was worse than every post-war recession in just about any metric you pick. Except for one. Global trade continued to climb after the nadir thanks to developing countries like China carrying what was left of world growth. 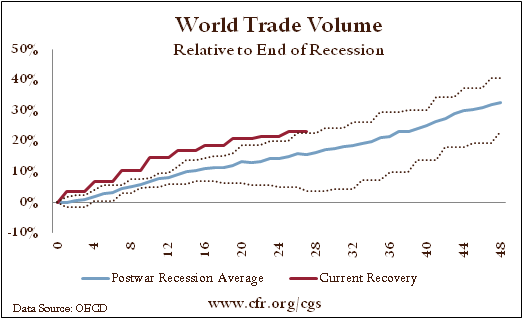 Houston was uniquely poised to capture the gains from a growing world, due to its proximity to Latin America and its strength in energy. Between 2008 and 2010, “more than 100 foreign-owned companies relocated, expanded or started new businesses in Houston,” Jankowski wrote.

While moderation protected the city during the 2000s, an openness to overseas (or over-the-boarder) business boosted job creation at a time that domestic demand was lagging badly. Although human mistakes can muck up the blessings of topography and geography in Houston (and they have), the city’s long memory helped it avoid the same mistakes of over-building and over-firing that plagued other cities and states.